While driving in a bitless bridle is not seen as often as riding bitless, there are people from all corners of the world doing just that and very successfully.
In fact, if you can ride bitless, why not drive bitless, and blinkerless for that matter! It's time we came out of the dark ages with our driving habits where tradition dictated that blinkers must be used (otherwise its dangerous!) and severe bits are the norm.
From what I understand, blinkers were developed to facilitate the fast ‘breaking’ of horse to harness, during the age when horses were needed for transport and work.
It was much easier and faster to put a young horse alongside an older seasoned horse, and put blinkers on them than take the time to educate/de-sensitise them to sudden noises and movements approaching from the rear while they were essentially trapped in the harness and shafts.

Now relationships have become a priority as we keep horses for more recreational pursuits and that has caused open-minded horse lovers to question tradition.
So, if we can ride horses without blinkers and have them so well educated that they accept things like traffic, other horses, dogs, bikes and other weird sights and sounds behind them, then we can do the same when they are being driven, provided we take the same, if not more time and thoroughness to educate them.

The advice often given for those destined to be carriage horses, is to ride them first for the education and exposure until they were solid. This makes total sense but, for those who can’t ride, and those with miniature ponies, a thorough education program while long reining and driving in poles is the next best option.

According to Cathie Hatrick-Anderson (pictured) - a horsewoman who drives her horse bitless and blinkerless, “Although a horse and carriage is a lovely sight to observe, it's one of the most dangerous things you can do with your horse, right up there with trailer loading. If your horse is a trained, trusting animal, neither poses much of a risk. If you have any problems with trust or obedience, you’re in a world of trouble with both.”
You can read about Cathie’s experience and see more photos of her driving bitless at www.bobcatfarm.com/driving_bitless.htm

It makes total sense to start a riding or driving horse in a bitless and blinkerless bridle so that holes in the training show up early, rather than be ‘hidden’ by using blinkers and a bit.

“An animal in pain does not pay attention to the horseman’s wishes and, under these conditions, accidents occur.” Says Dr Robert Cook in his article on driving bitless at www.bitlessbridle.com/DRIVING_BITLESS.pdf
“It is a risky mistake to use any method of communication (such as a metal rod in the mouth) that causes pain. This is a mistake with regard to the welfare of the horse and the horseman.”

So is there a difference in how we educate a bitless driving horse?

Essentially, it should be very thorough and take the time it takes for each individual horse. The driver should be an experienced horse person who has either driven horses before or reached a high level of skill with groundwork such as Parelli level 3, which is where working with the horse from behind (zone 4) enters the program.
You must also take into account that the weight of the reins and the leverage due to the length of rein, will cause more pressure on the horse compared to riding. For that reason, its best to choose a bitless bridle that has some noseband padding. 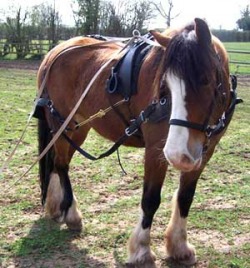 It is best to start with short reins while walking beside the horse (especially if they haven’t been ridden) to prepare them for the aids needed and to introduce voice commands.
The changing to lightweight reins like cotton lunge lines, run through the surcingle rings or driving harness terrets so the reins sit high along the horse’s back, minimizes the ‘drag’ on the head.
If you don’t have a driving harness, you can use regular saddle with the stirrups run up very short, or clip some rings (or even a snaffle bit) to the saddle’s front D rings to run the reins through. This might be a better option for very green horses as you can use a more ‘open’ rein to indicate direction.
Lots of groundwork in the long reins both on a circle (in an arena), and then around the property is essential to gain the horses’ trust in you directing them from behind.

Testing the relationship and building solid skills can be done by pulling logs, dragging tyres etc. then working between poles or pulling a sled.
When stepping up to this situation, its best to have a quick release system so that anything attached to the horse can be released easily and quickly if they start to take fright. 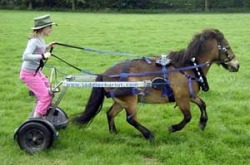 A wonderful invention that releases quickly is the Saddle Chariot and what better way to introduce your horse to pulling a vehicle. In fact, what a fun vehicle to have – and definitely a much safer way to start in harness. You can see them in action at www.naturaldriving.co.uk

If you don’t have access to one of these then choose a cart that is easy to hitch up and drive, taking care that it fits the horse.

Remember during your education of the driving horse that the hand aids are of prime importance. Voice aids and discrete communication via the whip are supplementary aids but the rein is the only direct communication that the driver has for most of the time.

Using a bitless bridle requires some adjustment to the way we deliver our hand aids – most people use a steady feel or pull when riding or driving with a bit, but do this with a bitless bridle and your horse may learn to lean on the contact and get heavier instead of more responsive.
I have found that a gentle rhythmic pressure works best and doesn’t give the horse anything to lean on. It also gives a reward (release of pressure) when the horse thinks about or actually responds - this is the way horses learn and become softer and more responsive.

A rhythmic feel can be as obvious as opening and closing the whole hand (combined with a pull/release from your elbow if needed), or as refined as opening and closing your little finger on the rein.
While it’s not necessary to do this the whole time you’re holding the rein, it is essential when you use the reins to indicate a stop or a turn, and when looking for collection. 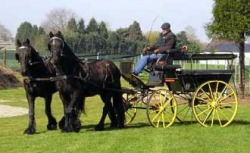 Once the horse is confidently pulling a vehicle in a familiar fenced area (large pasture or arena) then its time to venture further afield. This is best done in the company of a well educated friend of the horse you are driving, so in effect you are taking a mobile comfort zone with you. This horse could be ridden or driven, or even led by someone competent as a lead horse, then behind the carriage horse, especially if that horse hasn’t been out much without company. 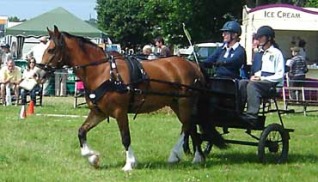 As Dr Cook says: “The two compelling advantages of the Bitless Bridle are that, first, it is virtually impossible to inflict pain. Secondly, partly because of this pain-free feature but also because of the head-hugging design of the bridle, it provides superior and comprehensive communication. Drivers are safeguarded against the possibility that, in an emergency and albeit unintentionally, they might hurt the horse and precipitate a crisis. In driving, as in riding, I am of the opinion that accidents are less likely to happen if the bridle is bitless rather than bitted.”

Here is an example of how a ‘problem horse’ was educated to bitless/blinkerless driving and this is what her owner said:
“We did try blinkers but Taz is so nosy she just kept looking around more to see everything. My principle anyway was I would rather a horse be happy with what’s behind it rather than hide it. Since she was so happy and "controllable" in the BB I just kept on with it. 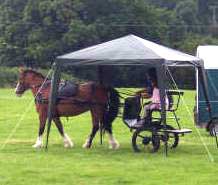 Read more about Taz and Laura’s driving challenges here www.bitlessbridle.co.uk/articles/driving-bitless-dr-cook-bridle.php
Taz is pictured above at the Three Counties Show, and here demonstrating how well she does a Gazebo obstacle as a real test of calmness and accuracy – please don’t try this unless your horse is extremely well educated and solid with driving as it could be very easy to drag the whole thing down and cause a real wreck!

For inspiration, have a look at this video of the first time a carriage horse changes to bitless – she has been educated without blinkers from the start. www.youtube.com/watch?v=6HuOOSLxHBs

Education and a thinking horseman are the two factors that will ensure the success of driving bitless and blinkerless – it can be fun and safe if you take the time and enjoy the journey.